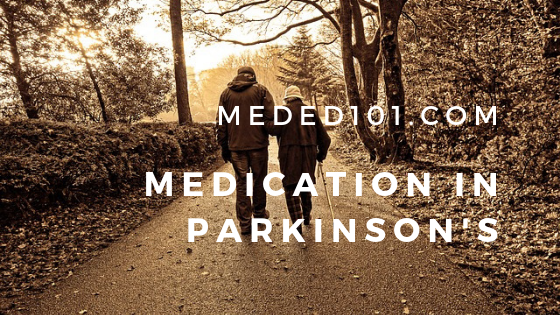 Parkinson’s is one of the most complex disease states you will encounter. Whenever you talk about a disease of the brain and nervous system, you know that we likely don’t have a 100% clear understanding of how it works and why it happens. However, we definitely know that dopamine plays a critical role in these movement symptoms. Recognizing the trials and tribulations of medication in Parkinson’s can help us improve the lives of our patients. I get quite a few questions about Parkinson’s disorder, so when you get confused, go back to these two simple principles.

Because of the low amount of dopamine in the brain, we supplement with levodopa. Levodopa gets converted in the brain to dopamine and helps relieve symptoms. Like any drug, levodopa has a specific duration of action and can wear off. When the drug is wearing off due to dwindling concentrations, the patients Parkinson’s symptoms will return. Remember the acronym TRAP. The primary symptoms are Tremor, bradykinesia (slow movement), Rigidity/stiffness, Akinesia (lack of movement), and Postural instability.

If a picture is worth a thousand words, how much is a video worth? You can definitely see the tremor, stiffness, slow movement, difficulty of movement and the unsteadiness in the video below. This is classic Parkinson’s.

On the flip side, if patients get those spiking levels of dopamine from the use of levodopa, dyskinesias can occur. Think of these movements as uncontrollable and involuntary. If you look at Michael J. Fox in this video, you can see what dyskinesias look like.

In addition to the dyskinesias, higher concentrations of levodopa can cause nausea as well as psychosis type symptoms like hallucinations.

Here’s one last video that is extremely helpful in recognizing dyskinesias.

Medication In Parkinson’s – What do we do?

Tracking symptoms of Parkinson’s disease is very important and something that you can let patients know about. This will definitely help the prescribing provider know how to adjust the carbidopa/levodopa. If excessive dyskinesia or other adverse effects occur, the dose or frequency of carbidopa/levodopa will likely be reduced.

If those concentrations drop too quickly before the next dose and Parkinson’s symptoms return, two common interventions include adding a dose or switching to an extended release product. It is also really important to recognize the negative effect that other medications (dopamine blocking agents) can have on Parkinson’s symptoms.

Hopefully, this gives you a better understanding of medications in Parkinson’s and how they can negatively and positively impact a patient’s life.