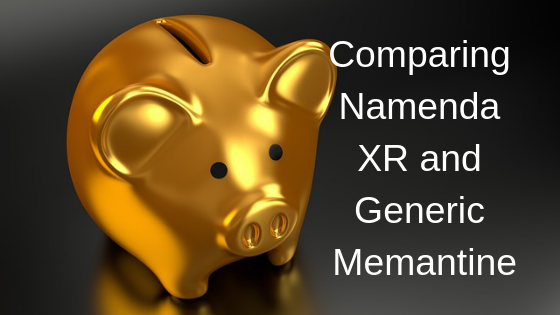 I feel like I’m still seeing quite a bit of Namenda XR being used. Namenda XR comes in with a price tag of about $500 dollars per month. The generic version of Namenda (memantine) is an immediate release formulation that is probably going to cost less than $50/month. Source

When comparing Namenda XR and memantine, the only significant advantage (in my opinion) of Namenda XR is that it is dosed once per day. The generic, immediate release memantine is dosed twice daily.

In my opinion, the dosing advantage compared to the cost of Namenda XR at over 10X the price of the generic version would not be enough to recommend the extended release version. In fact, in many patients (at this time), I am recommending that patients be switched off of the XR formulation. If you are unsure how to do that, here’s the conversion of Namenda XR and the immediate release.

My patients are often already taking medications at multiple times throughout the day, so adding another dose is often not an issue. Want to learn more on Namenda? Enjoy this free podcast!

What do you think?