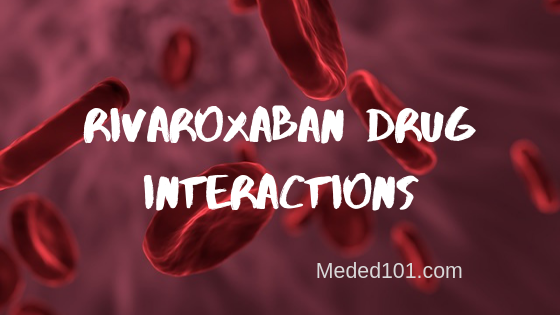 These rivaroxaban drug interactions are things that I think are highly important, or I have seen in clinical practice cause an issue so with that stated the list is definitely not all-inclusive. If you aren’t sure if there is an interaction between agents, you need to look it up. Always.

Avoiding the use of rivaroxaban is recommended in patients on dual inhibitors of p-glycoprotein and CYP3A4. What are these drugs you ask? Here are a few examples, and you will probably notice that these drugs aren’t used crazy often.

Avoiding the use of CYP3A4 inducers with rivaroxaban is also recommended.Carbamazepine is a medication that I do see used occasionally. Phenytoin, rifampin, and primidone are also other agents that I see used from time to time. Keep an eye out for these as they will actually lower concentrations of the rivaroxaban, and potentially lead you down the path of treatment failure, increasing the risk of stroke by not having adequate concentrations.

Saint John’s wort is an OTC supplement and has CYP3A4 induction capability.

With bleeding risk, I’m always concerned about patients who are receiving antiplatelet medications with their anticoagulant. This is something that needs to be watched closely and I always try to ask these patients if they are having any signs and symptoms of bruising or bleeding.

NSAIDs are absolutely discouraged because of their ability to insult the GI tract as well as their antiplatelet activity. GI bleed risk goes up substantially when anticoagulation is used with an NSAID.