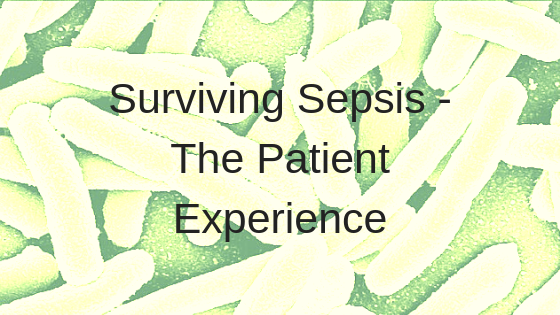 I’ve had an incredible amount of pharmacists share their case studies and stories.  Today is one of those days where I can share another one of those stories and learn a valuable lesson as well.  I’d like to thanks Lisa Morris RPh, BCGP, FASCP for donating her personal story and reminding us of the vicious nature of sepsis.  For more information about sepsis, you can visit the Sepsis Alliance website.

Seven years ago after being treated for a spinal abscess suspected from a dental implant, I was home recovering from a second spinal surgery required due to antibiotic treatment failure after the initial surgery. (Sepsis and Dental Health, Sepsis and Surgery) I had been home less than 72 hours when, after a day of feeling weak and tired, I spiked a fever around 104 and the chills set in. I was shaking so hard that I was unable to talk. As a consultant pharmacist, I felt well versed on educating the nurses and patients I see in assisted living and skilled nursing facilities about sepsis. But I was unprepared for the speed with which the fever and chills took over, and the feeling of helplessness that followed as my husband rushed me to the nearest emergency room while I tried to communicate with him that I was afraid it was sepsis.

One of the most terrifying realizations I had was that I was too weak to communicate well with my caregivers. This led to a dose of vancomycin despite my allergy to it, because I could not tell the admitting nurse I was allergic. Over the next 48 hours I was in and out of consciousness while the team treated me empirically and waited for the cultures to grow. At one point I remember that my nurse was unable to get a blood pressure on me and the team rushed into my room and ultimately got a reading by wrapping the blood pressure cuff around my leg. (That really hurts, by the way) It was determined that my PICC line was infected and once it was removed, I was treated with IV antibiotics specific to the bacteria from the PICC line as well and antibiotics to treat the original spinal infection.

It is impossible to describe the level of anxiety and fear that I felt during that time. Sleep was next to impossible, yet I was not alert enough to truly communicate well with anyone who came to visit or take care of me. My brain was active enough to read the labels of the IV antibiotics I was given but I could not think well enough to ask vital questions about what bacteria caused the infection or how long I would need to be in the hospital. At one point I opened my eyes to find the physician on duty was someone I worked with regularly at one of my facilities. It was shocking to realize that she did not recognize me and I wondered how that was possible? Going home after being stabilized and having another PICC line inserted was such an amazing feeling. I used a walker for some time before I was stable enough to walk with a cane and then on my own. The recovery was slow and humbling.

The experience has made me so much more aware of the importance of educating others about the signs of sepsis. It has also opened my eyes to what if feels like to be the patient rather than the healthcare provider. I am grateful that I am still here, and fully appreciate every day that I get to be with my husband, children and family as well as the opportunity I have to practice as a consultant pharmacist and educate others about sepsis.

If you have a case study or scenario that you think would be valuable for the audience of Meded101.com, please feel free to contact us.