Comparison of Cation Exchangers in Hyperkalemia 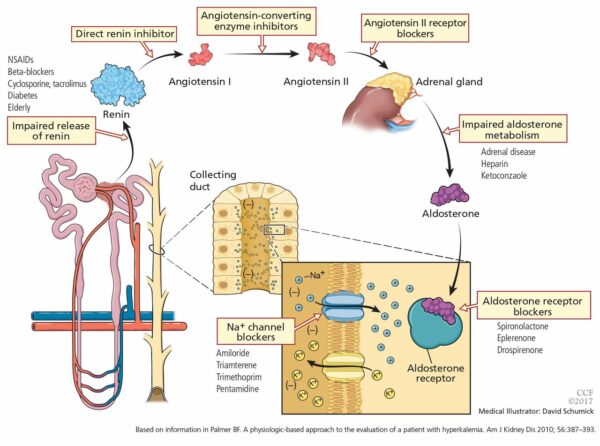 Potassium plays a vital role in maintaining cellular function. In this article, we will provide background information on potassium homeostasis and provider a comparison of cation exchangers in hyperkalemia management.

Just about 98% of our total body potassium is located in the intracellular compartment with the remaining 2% in the extracellular space. Excitable tissues in particular, such as nerve and muscle cells, rely on these potassium gradients to function properly. The kidney is primarily responsible for maintaining potassium homeostasis, therefore it is no surprise that potassium disorders are relatively common in patients with kidney dysfunction. Although, the limited nephrons remaining in chronic kidney disease actually provide an adaptive response that can generally maintain homeostasis until the glomerular filtration rate (GFR) falls below 15-20 mL/min. If hyperkalemia is noticed without this GFR deficit, it is likely due to other reasons such as Renin-Angiotensin-Aldosterone system (RAAS) disturbance by medications (i.e., ACE-Is, ARBs), distal tubular defects (i.e., renal transplant, potassium-sparing diuretics), or other damages that result in reduced mineralocorticoid activity.

Mineralocorticoids (i.e., aldosterone) largely influence concentrations of sodium and potassium in the body. There are a variety of medications that carry a risk of hyperkalemia given their direct or indirect actions to decrease mineralocorticoid activity and subsequently result in decreased renal potassium excretion. The image below lays out multiple different mechanisms associated with drug-induced hyperkalemia and common culprits to be aware of.

Beyond medication use, a few associated risk factors for hyperkalemia include low GFR, male sex, diabetes, congestive heart failure, malignancy, exercise, gout, and low hemoglobin. The definition of hyperkalemia in terms of lab values varies in the literature and throughout guidelines. The goal serum potassium range is typically around 4-5 mmol/L, with hyperkalemia around 5.5 mmol/L or greater. Hyperkalemia may often go unnoticed unless severe (≥6 mmol/L), therefore it is especially important to follow monitoring guidelines for kidney disease and for patients taking RAAS inhibitors. Severe presentations are typically accompanied by neuromuscular symptoms, from tingling/weakness to paralysis, and cardiac abnormalities including ventricular arrhythmias and cardiac arrest.

In hyperkalemic emergency situations, acute therapy typically includes calcium and insulin. Calcium antagonizes the actions of potassium on the heart while insulin drives potassium into cells. Albuterol may also be used to provide an additive effect with insulin. After initial management, diuretics (i.e., loop, thiazides), cation exchangers (AKA potassium binders), and dialysis are considered to help remove potassium from the body. Diuretics increase renal potassium excretion, and cation exchangers bind potassium in the gut and increase elimination through the bowel. Both of these therapies are used in acute and chronic hyperkalemia to reduce serum potassium levels.

Sodium polystyrene sulfonate (SPS) was the only available cation exchanger for decades until recently when newer agents have been approved for hyperkalemia. SPS is now typically administered as a last resort because it has been linked with a rare occurrence of intestinal necrosis. This medication is also often associated with major diarrhea because it is combined with sorbitol to promote potassium removal through osmotic diarrhea. Sodium zirconium cyclosilicate (SZC) and patiromer are not known to be associated with these risks beyond mild diarrhea. These cation exchangers do not have published head-to-head trials for efficacy and safety data, although I do believe there is a study in progress (see: KBindER). For now, I have summarized current information in a table for your reference as there has been considerable confusion surrounding these products.

Hyperkalemia provides a significant burden to our healthcare system given that it typically goes asymptomatic until severity increases and the patient requires inpatient admission. Future studies involving comparative data between medications will be helpful for individualizing therapy recommendations and reducing future ED visits. This is also your reminder to be diligent about monitoring potassium levels with patients on any of the medications mentioned above (looking at you, lisinopril!) to prevent any complications and further drug burden associated with hyperkalemia.