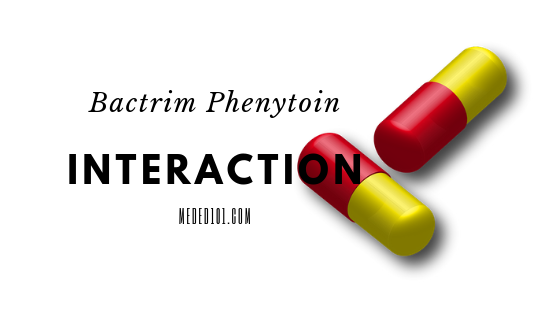 In the case scenario below, I outline a case where the Bactrim phenytoin interaction leads to phenytoin toxicity.

An 81-year-old female has a history of GERD, OA, and seizures. She hasn’t been feeling the best and reports fatigue and painful urination. She has experienced this before and believes she has a urinary tract infection. A urinalysis is ordered and her final diagnosis is a UTI.

For her UTI, she is prescribed Bactrim (sulfamethoxazole/trimethoprim) twice daily for 10 days.

Prior to the Bactrim Rx, she has been seizure free for seven years. Her most recent phenytoin level was from 6 months ago and was 15.9. Prior to the symptoms stemming from the UTI, she was doing well and displaying no signs of phenytoin toxicity.

On day 5 of the 10-day course of sulfamethoxazole/trimethoprim, she begins feeling dizzy, lethargic and her husband reports that she is more confused. In addition, the husband mentioned that she has been slurring her speech more. The husband feels that she is having a stroke and takes her to the emergency department. Upon assessment, a phenytoin level was checked and came back at 26.8.

With the Bactrim phenytoin interaction, it is likely the trimethoprim that is the problem. (Reference) Trimethoprim can inhibit CYP2C8 which plays a role in phenytoin metabolism. When CYP2C8 is inhibited, this can reduce one of the metabolic pathways for phenytoin breakdown and ultimately increase phenytoin concentrations.

One challenge that you will likely run into more in the management of UTI’s is all of the warnings regarding fluoroquinolone therapy. I anticipate that you will likely see more and more sulfamethoxazole/trimethoprim (and less ciprofloxacin) use because of this warning. Here are a couple more drug interactions that you should be aware of with Bactrim. One drug interaction outlines the potential for supratherapeutic INR. The other previous post outlines a case of severe hyperkalemia due to a drug interaction with sulfamethoxazole/trimethoprim.