5 Drugs That Cause Pulmonary Toxicity 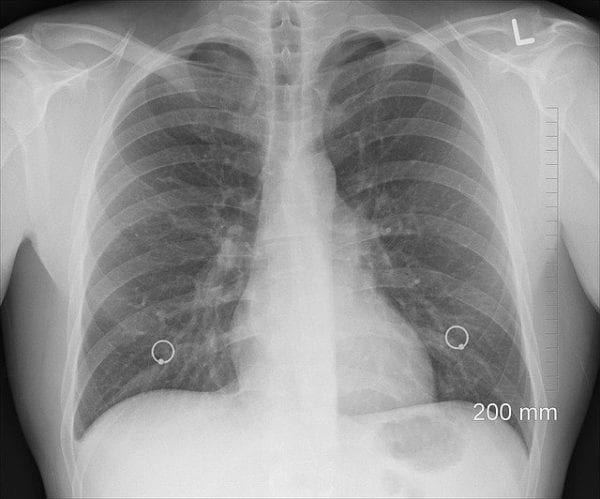 Pulmonary toxicology involves the airways, lung parenchyma, mediastinum, pleura, pulmonary vasculature, and the neuromuscular system based on the route of exposure to the offending agent and the dose and duration of exposure. Acute pulmonary reactions are commonly manifested by fever, chills, cough, chest pain, dyspnea, pulmonary infiltration with consolidation or pleural effusion on x-ray, and eosinophilia. Here’s my list of top 5 drugs that cause pulmonary toxicity and their suspected mechanism.

Nitrofurantoin is commonly used in the management of urinary tract infections. One of the possible mechanisms of nitrofurantoin causing pulmonary toxicity is hypersensitivity reactions. The hypersensitivity reaction causes lymphocytes to produce mediators which release many cytokines, resulting in lymphocytic alveolitis. Another proposed mechanism is the induction of the production of oxidants in the lung, activating several inflammatory responses.

In addition to nitrofurantoin, amiodarone is another drug that you may see used in primary care and geriatrics. It likely causes pulmonary toxicity via the production of toxic O2 radicals and an immunological cytotoxic T cell reaction. The risk of pulmonary toxicity increases with higher cumulative doses of amiodarone.  Patients who are taking a daily dose of 400 mg or more for more than two months or a daily dose of 200 mg for more than 2 years are at the greatest risk.  Here’s more information on the pharmacology of amiodarone.

The mechanisms of bleomycin toxicity possibly includes oxidative damage, the release of inflammatory cytokines, a deficiency of the bleomycin hydroxylase enzyme in the lungs, and genetic predisposition. Some patients develop pulmonary toxicity after the first dose while others may take months to develop.

While potentially not as well understood or as frequently seen in the literature, methotrexate has been associated with pulmonary toxicity. From these case reports, the mechanism of methotrexate-induced toxicity is thought to be a hypersensitivity reaction and/or direct toxic effects from the drug.